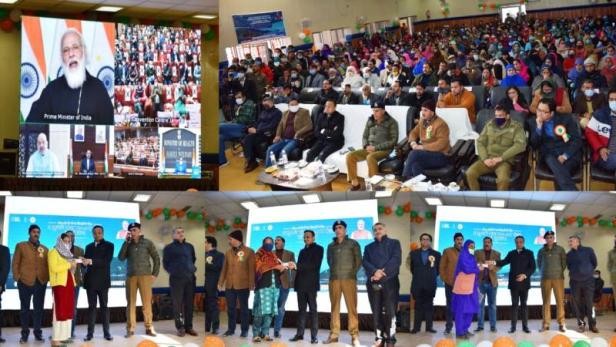 The scheme will provide Rs. 5 lakh universal health coverage to J&K households for treatment at the government & private empanelled hospitals for secondary and tertiary care hospitalization.

The live streaming of the launch ceremony was organized in all districts where experts informed the participants about the benefits of the scheme. Golden Cards were also distributed among the beneficiaries.

The DDC appealed the PRI and ULB members to aware the general public about the scheme so that nobody is left out in the process. He added that a population of over 6 Lakh will be covered under the scheme in the district.

AT RAMBAN: Series of programmes were organised across Ramban district on the launch of AB-PMJAY, SEHAT by District Administration Ramban in collaboration with Health Department.

AT RAJOURI: District Administration Rajouri organized a grand program at PWD Dakbunglow whereat live streaming was witnessed by a large number of people. The program was presided over by the Member of Rajya Sabha, Sham Sher Singh Manhas.

District Development Commissioner, Mohammad Nazir Sheikh and other officers from police and civil administration were also present. It was informed that 12 PM Arogya Mitras have been engaged as frontline workers for registration and facilitation of the beneficiaries, and 90 CSCs with a number of operators are functioning in Rajouri for the effective implementation of the scheme.

The Health authorities also informed that AH&GMC Rajouri, SDH Rajouri, CHC Nowshera, CHC Kalakote, SDH Kotranka, and CHC Thanamandi, besides a total of 219 Government Hospitals and 34 Private empanelled Hospital in the UT will provide the services under the scheme.

On the occasion the Medical superintendent District Hospital, Dr. Parveez Iqbal Wani briefed the participants about this scheme. Details about the registration process were also provided by representatives of Health Department.

AT DODA: District Administration Doda hosted the telecast of the grand launch ceremony under the overall supervision of DDC Dr Sagar D Doifode, at Town Hall.

On the occasion, the DDC distributed golden cards among the newly enrolled beneficiaries under the scheme. He asked the health department to ensure wide publicity of the scheme and directed the concerned to achieve 100% enrollment of all the residents of the district under the scheme without any fail.

AT KATHUA: Live streaming of inaugural Ceremony of PMJAY-SEHAT was held across Kathua district where Golden Health Cards were distributed among newly registered beneficiaries. A large number of people including PRI, ULB members, besides government functionaries attended the launch ceremony telecast.

Deputy Commissioner Kathua, Om Prakash presided over the main function and threw light on the scope of the ambitious Social Endeavour for Health and Telemedicine (SEHAT) scheme.

The District Development Commissioner, Indu Kanwal Chib gave a detailed orientation about the programme, issued necessary instructions to the participants and sought help from the PRIs to adopt this programme for the benefit of the general public.

Similar programmes were organized in all the Medical Blocks (POUNI, KATRA, & MAHORE) in which more than 150 golden cards were distributed among the needy. The programme ended with vote of thanks by Chief Medical officer Reasi,Dr. Rajeev Sharma.