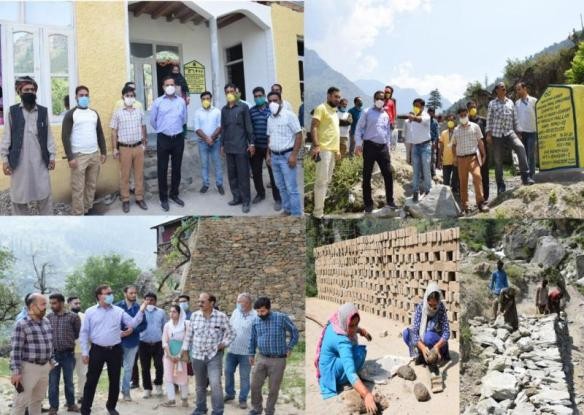 During the first day, Director visited and inspected a number of development works being executed under MGNREGA, 14 FC, SBM (G) and PMAY (G) in various areas of Badhat and Bugrana panchayats of Block Drabshalla and Trigamn A of Block Trigam. He also inspected the works in BT 1st, Pochhal B2 and Lachhdayaram Panchayat of block Kishtwar.

During the visit, he also camped at Panchayat Ghar of a far off Panchayat Bugrana of block Drabshalla and interacted with the locals. Director convened a meeting of BDC Chairpersons and discussed various issues regarding the functioning of RDD.

On 2nd day of the tour, he visited block Nagseni and Mughal Maidan wherein he inspected a number of developmental works. He appreciated the work done under PMAY(G) in block Nagseni. He also interacted with BDC Chairpersons, Sarpanch, Panchs and general public of far flung Panchayat Sigdi Bhatta of block Mughal Maidan.

Meanwhile, he held a meeting with ACD, Executive Engineer, BDOs and other field functionaries of RDD Kishtwar and directed them to start atleast one work under MGNREGA in each and every ward of all the Panchayats. He also asked for 100 per cent completion of estimation on Secure, timely payments to job card holders, completion of 100 Aadhar seeding.